Born in Leigh, Kent in approx.1893. Son of John and Rose Adelaide Smith of Lightfoot Cottages, Leigh, Kent. His father worked as an ordinary farm labourer. Remembered on his parents’ gravestone in St. Mary’s, Leigh churchyard. 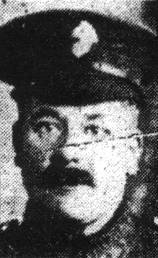 Mr and Mrs Smith of Lightfoots, Leigh, have received news that their eldest son, Private W. A. Smith, of the West Kents, was killed in action in France on the 3rd May. He enlisted in February 1915, was drafted to the Dardanelles and took part in the Sulva Bay landing. He was wounded in October and was finally drafted to France in December 1916. Mr and Mrs Smith have two other sons serving and much sympathy is felt for them in their bereavement.