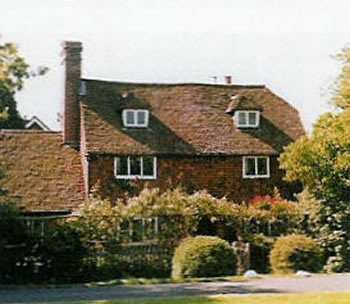 Elizabeth Cottage on the Green is a 17th-century timber-framed cottage, tile hung at the first floor. It has a large inglenook fireplace and the original brick floor in the main living room. It was originally a two bed roomed cottage but is now extended at the side and back.

It is thought that the cottage may have been the farmhouse belonging to a farm south of Leigh called ‘Muscombs’. It was owned by the Children family until 1822 when it was bought by the Penshurst Estate along with the land to the south (Muscumbs); it was sold by the Penshurst Estate in 1921.  In the Penshurst Sales Particulars (p19) the cottage is described as a superior brick-built and tiled cottage, facing Leigh Green, and extending to an area of about 35 perches. It was let to Mr Henry Maskell on a yearly (29th September) tenancy.  The cottage contains:  three bedrooms, attic, sitting room, kitchen, pantry and scullery.  Company’s water and gas laid on.

The land to the south, also  formerly Children land, was also bought by John Shelley Sidney of Penshurst in 1816 and therefore  is also included in the sale of Penshurst Estate Leigh holdings in 1921 and is described as an ‘Enclosure of Grass and Arable Land’, close to Leigh Village and very suitable for a building site, extending to an area of about 14 acres and 15 perches.  It had the benefit of a right of way for all agriculturist purposes over the accommodation road No. 366 between the points A and C on the plan – that would be Green Lane today.   This would be the land on which  the houses in Green View Avenue and Lealands would eventually be built.  In 1921, the majority of the land was tenanted by Mr Charles Friend (arable and pasture), by Mr H Maskell (a small area of ‘garden ground’ next to Elizabeth Cottage) and also a part ‘allotment garden’ tenanted by the Kent Cottage Company.   It says the purchaser of this lot ‘shall erect a fence between points E and D’ – i.e. that would be between the point where the road at the Green starts along what is Elizabeth Cottage’s boundary along Green View today. The footpath drawn on the map, which is today’s Green View Avenue, would eventually be widened to form the current road.

The cottage was named ‘Elizabeth’s Cottage’ when it was bought in 1921 by Alice Mayne; it was called Elizabeth after Alice’s sister, Elizabeth, who lived in the cottage with her.

A number of people living in the village remember the cottage for two reasons; there was a ‘two-hole’ privy in the garden (probably necessary as there were apparently eleven in the family at that time). Also, in the garden of the cottage (where ‘Wildhatch’ is now) there was a tennis court and this was used in the 1920s and 30s by villagers.