We currently do not have much information on Moorden.

p.3:   In the ‘document’ in the parish registers re: liability to repair the boundaries of the Churchyard, in 1750 Moorden was owned by the Children family (on Tonbridge) and it was liable for payment in respect of 25 feet of the church boundary.

p.17: At the time of the Children bankruptcy in 1813, Moorden was bought by William Wells (owner of Redleaf since 1806) and also Little Moorden.  (the Wells family had been shipbuilders in Deptford for at least four generations).

P117: Biddle is discussing the various maps of Leigh (and area)   Andrew, Drury and Herbert’s Map of 1769 the first large scale map of the whole county of Kent – and gives impression of the whole parish of Leigh – and Moorden farm is shown on this map.

Moorden is also shown on Hasted’s Map of the Lowy of Tunbridge.

There was also a Turner family at Moorden at some point:  from the burial registers there is  William Turner of Morden  buried  15 Nov 1692.

From other entries in the Colyer Ferguson registers, his possible family could be that of Thomas Turner and Hester.  There are baptisms for this family at Leigh at the same time:

However, there is no further information about the family and having had a quick look at ancestry, I could not find a Will for William Turner of Leigh died 1692 nor for a possible Thomas Turner of Leigh (death date not known).

The Leigh Archive has copy of the following two documents for Moorden Farm House which show that at some point it was used as a place of worship: 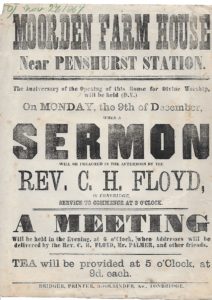 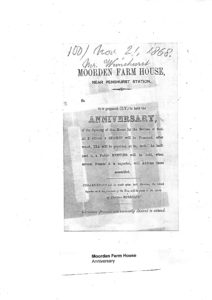 Moorden Farm House: Anniversary of Opening of house for Service of God.

There are also the following postcards showing Moorden Cottages: 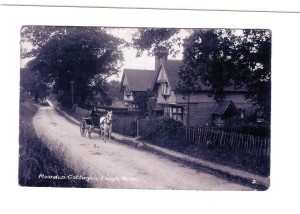 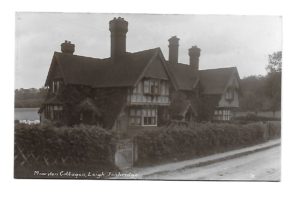 Moorden Cottages – photograph given to the Society by Sue Southworth