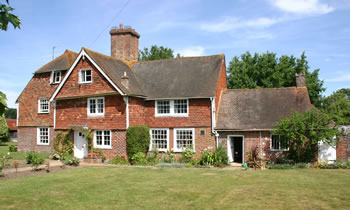 The area known as Barnetts was occupied at least as early as the 13th century; the moated site, which was part of the farm but is now a separate property, was excavated in the 1960s by John Parfitt, who uncovered remains of the foundations of two buildings, along with pottery and other evidence of occupation dated between 1270 and 1320. The name Barnetts indicates an area cleared by burning; it is not known whether fire or possible flooding was the reason for the abandonment of the moated site, or whether other dwellings were built meanwhile, but it is known that the house now named Great Barnetts was built in about 1580 by Thomas Lewknor. Barnetts Farm was a large farm with land which stretched down to the Medway to the south and to the Green to the west. The 16 th century property had several large barns including a 3-bay threshing barn and a granary, the roof of which is of great interest having a central inverted pyramid well, possibly to collect rainwater.

The Lewknor family owned Barnetts Farm until 1716, when it was sold to George Children. In 1816 the Children family sold it to the Sidneys of Penshurst, who owned it until 1922. Amongst the tenant farmers during this time were Mr Hollamby and Mr Faircloth. Then a new farmhouse was built, now named Barnetts Mead, and the house named Great Barnetts became a property separate from the farm.

The house is of brick and partly tile hung, with a large central chimney into which rooms on all three stories have fireplaces. There is some panelling in the entrance hall and over the fireplace in the main sitting room, and beautiful linenfold panelling on the doors of that room. Outside the front of the house by the roadside is a stone mounting or “jossing” block, which was used to facilitate the loading of packhorses.

The old Scullery, to the right of the house when viewed from the front, has not been modernised and the two pictures below show the original sink and fireplace. 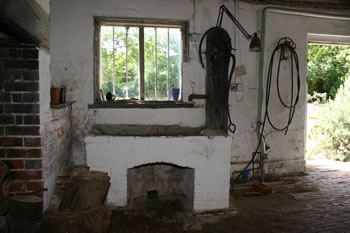 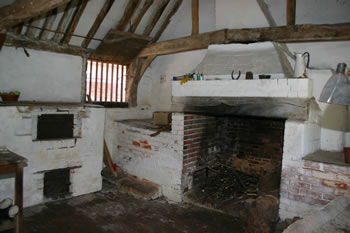