↓ Skip to Main Content
Home › Around the parish and MAPS › Institutions, clubs and teams › Leigh School

Leigh School as we understand it was established in the 1870s following the Education Act of 1870.  However, prior to 1870 there had been attempts in Leigh to provide some form of education for the poorer children of the village.

Even before the 19th century there is evidence of this – Frank Hawkins, a former Leigh resident, did much research into the village’s history and we have his notes from the 1730-1750 period on the Leigh Poor House.  Goods for the workhouse were a regular expenditure – foodstuffs and clothes for the paupers, some household goods also; but another role played by the Poor House was to provide school and medical help.  In the 1730s there are fairly regular payments for the schooling of workhouse children.  In 1731 Goody Knight was paid £2-7-6d for a year’s service in monthly payments varying from three shillings and sixpence to seven shillings and tuppence.  In 1732 her place was taken by Mary Hunt who continued to teach for six years, though her monthly income never exceeded three shillings.  After 1738, there is no further mention of schooling but this does not mean that some form of schooling did not continue.

The 1841 Tithe Map shows no building where Leigh School is today, but it shows a building, described as a Charity School, on the Green in front of the Post Office.  At the moment, we have no further information on the Charity School on the Green except that it probably pre-dated the National School movement which started in 1811: prior to 1800 education of poorer children had been limited to isolated charity schools or via the non-conformist movement  and their Sunday Schools – and as mentioned above perhaps throughout local Poor Houses.

There is also another school on the 1841 Tithe Map – a National School, on the north side of Powdermill Lane (the site of  Old School House today).   This school would have been formed as part of a movement in the 19th century to provide elementary education, in accordance with the teaching of the Church of England, to the children of the poor.  The National Society for the Promotion of the Education of the Poor in the Principles of the Established Church (or The National Society for short) was founded in 1811, one of several movements seeking to promote education.  The founders were concerned about the fate of the population including children, working in the factories, mills, and mines of newly industrialized Britain and set up the Society to raise money to build schools and pay teachers.  The aim of these schools was to teach basic skills and also to provide for the moral and spiritual welfare of the children by teaching them the ‘National Religion’ as represented in the Church of England and Wales.  The Society wanted to found a church school in every parish and by 1851  there were 12,000 schools across England and Wales.  As a consequence of this, the National Society also became the first organization to train teachers and later publishing education resources in Religious Education.   From 1833 the state began to pay annual grants to such organizations and over time they were accompanied by inspections and increasing demands from the state.  These National Schools provided the first near-universal system of elementary education in England and Wales and would eventually be absorbed into the state system, either as fully state-run schools or as faith schools funded by the state  (Information from The National Society website and Wikipeadia).

Leigh children were to be beneficiaries of this movement and the National School still appeared on the 1870 Ordnance Survey map where Old School House is located – described as a School (Girls)” , while a small building located on the site of the present school is described as “School (Boys)”.   By 1870 the Charity School on the Green had been demolished.

According to Lawrence Biddle (Leigh in Kent 1550-1900), prior to 1870 the western boundary of Leigh Green extended to the side of Orchard House.  Shortly before 1870 the central block of the school was built, entirely of brick, on the western side of the Green with an entrance facing the High Street.  The remainder of the school, including the school house, is partly stone and partly brick and was designed by George Devey.  It had not been built in 1870.  Part of this extension would have been the infants school which is reputed to have been built by Samuel Morley at his own expense.

An additional building known as the Iron Room was built in 1896 by Samuel Hope Morley and Mrs Hills of Redleaf at a cost of £250.  This was finally pulled down in about 2000 when it was replaced by Jessica’s Hall, a new purpose built school building.

The above notes are by Joyce Field (October 2016): a further history of Leigh School will be produced in due course.

The following are Some notes from School Log: the Society has the complete School Logs from 1926 – 1971

In 1926 the school was having a few problems. The weather had been so bad that in January nearly half the children could not get through the deep snow. Then there were floods and for much of the winter and spring the ground was so wet that the boys could not do their gardening. Woodwork classes were substituted. The newly appointed Headmaster, Mr Walter Gibbon, installed in the School House next door to the school, also had to cope with staff sickness and various illnesses amongst the children. In April a third of the children were away with either measles or mumps. And the 130 boys and girls were still being taught in two classrooms.

Yet by May, when the Church of England Inspector, Mr Gorham, called, the School was clearly overcoming its problems. His report said:

“Much good work has been done in this school during the past year, & I can heartily sympathize with Mr Gibbons in the trouble he has had to meet in his first year in not having a full staff for many weeks. Wherever I thought knowledge a little weak, this is amply accounted for by the non-continuity of teaching owing to staffing troubles.

Having said so much I would now like to say that in every class the children were keen to do their best & that the repetition was always well known & the written exercises were most tidy and praiseworthy.

The top division has kept notes of their work through the year, which I was able to see & found them very neat and informing. Given better fortune this year both as regards staff and the health of the children, there is no reason why the knowledge of the children should not reach a high level.

Difficulties are being met courageously. There is a tone of willing endeavour throughout”.

Mr Gorham was not the only visitor. There was a doctor who checked over the pupils. The nurse came for the “head inspection” on 13 July, with a return visit in August to check on the “heads of those found unclean”. Mr Sturges, who was called ‘The Correspondent’, called to check the school and the Kent Education’s Gardening Inspector paid his annual visit. A gentleman – a retired major – came to extol the virtues of National Saving Certificates; and Mr Goodwin, the Chairman of the Governors, as we would call him today, and the main farmer in the village living at Paul’s Farm, often called in both formally and informally, as did the Vicar, Mr Sealy.

There were a good number of ‘special days’ which we do not have now. Shakespeare Day on 23 April meant lessons and essays of Shakespeare’s plays – with a prize given in the top class. On Empire Day – 25 May – “suitable lessons were given by the Headmaster. The children marched past the Union Jack and patriotic songs were sung. Afterwards, the children dispersed for games”. There was also Sunday School day in August.

Examinations were very much part of the curriculum even in those days, with the main ones at the beginning of August.

Then it was time for the holidays – five weeks from mid-August to the end of September (allowing time for the children to do their hop picking), with three weeks at Christmas and a week and a half at Easter.

All the former pupils from those days are still inclined to look back with fondness on their time at the school. 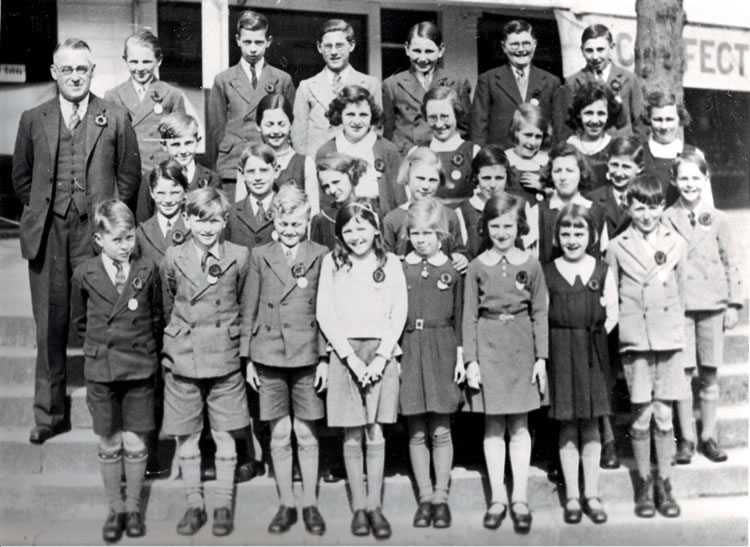 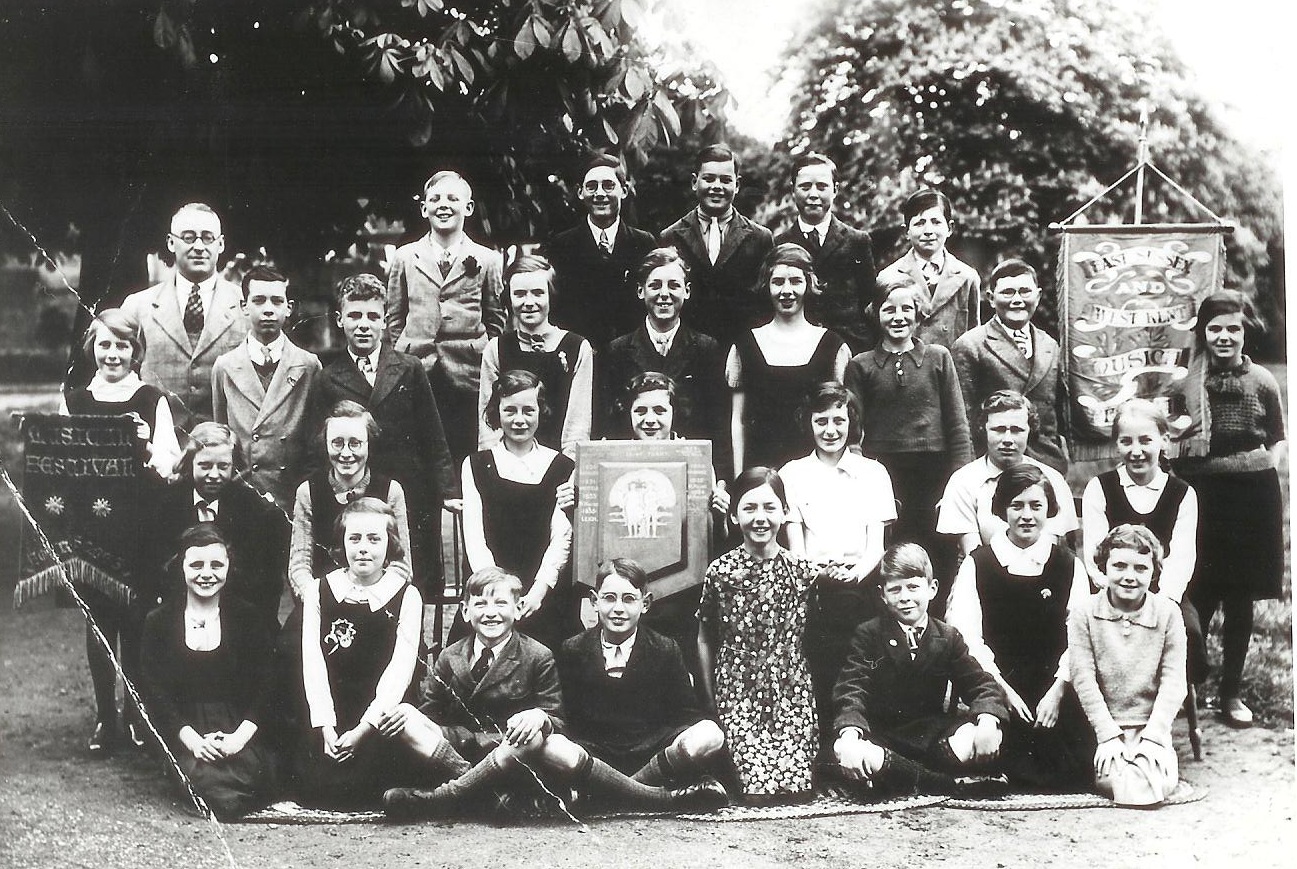 More pictures of Leigh School from various sources below – not very good reproductions, and better copies are in the Leigh Archives:

Unfortunately the text is not legible – therefore is given below:

Mrs Vivien Excell, of Uridge Crescent, Tonbridge, who recently celebrated her golden wedding, lent me this photograph of Leigh Church School pupils and staff taken about 1931.  Mrs Excell, formerly Vivien Sayers, was born near Crockham Hill and later moved to Leigh.  They lived on the road to Chiddingstone Causeway near the old airfield.  Mrs Excell left school at the age of 13 and went ‘into service’, in her case at Leigh vicarage.  Names, as far as Mrs Excell can recall them are:

Unfortunately, not a very clear picture and some faces missing.  It is from the Kent Messenger; Names in the picture are:

In 1935, when the Leigh School was still a Church of England School, the Vicar, Mr Sealy, was the Chairman of the Governors. On 30 November he received a damning report about the School, but not about the education or the children or the teachers, but about the condition of the school buildings. The letter came from Mr E Salter Davies (CBE MA) who was the Kent Education Committee’s Director of Education and at the end of a catalogue of around twenty five faults, action is demanded.

There was a dangerous bulging over the top of a large window; the roofs leaked and were clearly rotten in places; the windows were decayed; the doorframes allowed in draughts and were loose in the brickwork; many gutters and drainpipes were broken or blocked up; the brick paths and the playground area sounded dangerous and the fencing round it “is beyond economical repair”; both the Infants’ urinal and the Boys’ urinal needed replacing, as did the buildings which housed them; the lighting and heating (“by Tortoise stoves and open fires) were declared inefficient but by today’s standards would also have been a high health and safety hazard; and finally the Iron Room – at that stage it was only forty years old instead of the 90 plus years when most of us remember it – was roundly condemned in almost every way.

And all this came from an architect’s report.

It is quite clear that the School was in a bad state of repair. Yet these are the years when all the pupils under Miss Ellis and the Headmaster, Mr Gibbons, felt that and still feel that their actual education was wonderful. In all my interviews for “We Had Everything…” not a single former pupil mentions the rotting windows, the urinals or the heating: they all remember the teaching and the teachers: and most are still convinced that the standard of basic literacy was higher then, than it is today.