Born in London on the 7 August 1875 to Fitzroy Paley Ashmore, Barrister-at-Law, and Marian Ashmore (formerly Bailey). Attended Eton College 1889-1892, winning the Open Croquet Championship in 1909. Recorded in the 1901 census as a Farmer staying at the Railway Inn Chiddingstone Causeway. Was living at Camp Hill, Leigh with his wife Edith when he enlisted in May 1915.

The memorial board to the men who served in the Great War in Chiddingstone Causeway Church was commissioned in his memory. 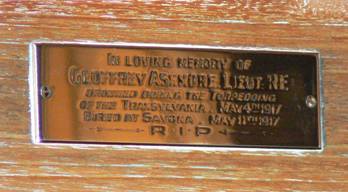 In loving memory of
Geoffrey Ashmore Lieut. RE
Drowned during the torpedoing
of the Transylvania, May 4th 1917
Buried at Savona, May 11th 1917
R.I.P.

On 4 May 1917 , the Hired Transport ” Transylvania “, proceeding to Salonika (northeast Greece ) with reinforcements, was sunk by torpedo off Cape Vado , a few kilometres south of Savona (northwest Italy ) with the loss of more than 400 lives. The bodies recovered at Savona were buried two days later, from the Hospital of San Paulo , in a special plot in the town cemetery.

Remembered on the Chiddingstone Causeway and Edenbridge Hospital War Memorials.