↓ Skip to Main Content
Home › Around the parish and MAPS › High Street South Side – East to West; North Side East to West; and Lower Green › Orchard House 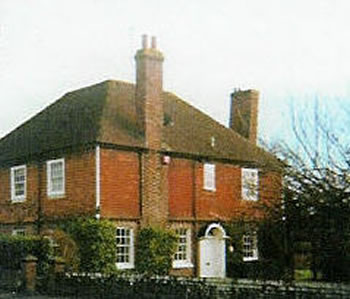 Orchard House was formerly called Clementes or Clements Farm. It formed part of the copyhold property of the Manor of Leigh Hollanden. In 1525 it was the property of Richard Lewknor – according to his Will –  Richard Lewknor owned and lived at Great Barnetts,

“My messuage and howse callyd Clements stondying at Lyghe Grene….to be solde for a prest to syng for my soule….”

According to the list kept by the Churchwardens in 1579 the owner of the house was responsible for the upkeep of 4 feet of the church boundary. It was extended in 1703 and became a late Queen Anne building.

In 1770 Anne, Lady Yonge and her son sold Clements Farm to Richard Allnutt, a city merchant. It was a farm of about 7 acres and in the eighteenth century it was lived in by the widow Medhurst, who came from the family who farmed Great and Little Wickhurst. Towards the end of the eighteenth century it was called The Bull and was probably an inn. Richard Allnutt’s grandson sold the house in 1797 to George Children. In the Children bankruptcy it passed in 1813 to the Crandall family who had been tenants since 1766. In 1803 William Crandall 11, who was described as a shopkeeper, passed it to his son, William 111, who was a linen draper of Maidstone who in turn let it to his brothers John and Henry Crandall.

In 1861 the house was altered and converted into a shop (see Leigh Shops and Trade). The Crandall brothers ran it as a drapers and grocers until about 1870. It remained in the Crandall family until 1908 when it was bought by Samuel Hope Morley.

Names given of those who ran the shop -after 1908 – (according to Chris Rowley’s book “We Had Everything ..”)  include a Mr Sales, Mr. Allchin, Mr Peters and Mr. Lindridge – no particular order – except that Mr Lindridge probably came before Mr Clement Bertram Burt who ran the shop between 1923 and ca. 1934.  The photograph on p. 24 of “We Had Everything …” of Lindridge’s stores is dated ‘about 1925’ – but 1925 Mr Burt is running the shop – so perhaps he carried on the Lindridge name, or perhaps the photograph is slightly earlier.   Harry and Jack Lucas remember the shop being owned by Mr. Burt who wore a black bowler hat and village children did odd jobs like weighing out 2lbs of sugar into blue bags, rolling in the vinegar barrels and delivering groceries on the big delivery bikes. They earned 6d per week on Saturday mornings.

The shop became Adin Coates in the mid-1930s,  in the person of Spencer Coates and his wife Margaret and they sold first clothes and then high class groceries.   They were there until the mid-1970s.

At some point, however, Orchard House became the Orchard House Restaurant and Bar – which also offered music and dancing.  The owners were Mr Anthony Stamp and his wife, Frances, who had converted the premises from a grocery store.  An article from “Focus June 1978” describes the restaurant and what was on the menu.  The exact dates that Mr and Mrs Stamp were at Orchard House are not clear, but we know that it was bought by Tony Woodburn – in 1978 – who used it as an antique clock shop.  Without checking exactly, it must have been sold later in 1978.  At some point the shop was divided into two halves, with one half being the Clock Shop.  The half nearest the school became a hairdresser, Genesis, in 1993: who operated a shop in these premises between between 1978 and 1993, this shop .  In 1993 the half nearest the school became a hairdresser, Genesis:  (who  ran this particular shop between 1978 to 1993 will be added in due course)

It was then bought in 1997 by Adrian and Cathrine Winbow and reconverted into a private residence in 1998. This was complicated, as it was a Grade 11 listed building. During the conversion, many of the original features were rediscovered and incorporated back into the building. It was also submitted for architectural awards for the sympathetic restoration and conversion to its former status.