According to Lawrence Biddle: Leigh 1550 to 1900 (p. 132), the shop known as Great Brooks was one property with two cottages on the east side of Church Hill which were pulled down when the bungalow on Church Hill was built.

One can see that the land belonging to the Shop at Great Brooks went right up to the church wall and a pair of cottages can be seen on the various ordnance survey maps and appear on the 1841 Tithe map.

The picture below shows what appears to be a weather-boarded white cottage (or perhaps cottages) on the right of Church Lane. 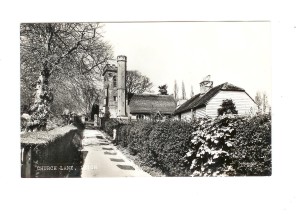 This cottage(s) was pulled down in the early 1970s and replaced by The Bungalow, which was again refurbished in 2012/13 and renamed The Croft.

Before the cottage was demolished, it was occupied by Mr and Mrs Horan (Horam).  According to the Bullingham sisters (see Chris Rowley “We Had Everything …” p. 300), Mr Horan was keen on bargains and used to go to all the shops in Tonbridge to find the cheapest place to get things.  He had a collection of sardines in a cupboard and he’d come in to us and say – ‘This week you can get sardines for so much at such and such a shop”.  He also made home-made wine from vegetables and fruit stored it in the shed.

The Parish Council Minutes refer briefly to the demolition of the cottage of Church Hill in 1971/72:

1 November 1971:  Development at Church Hill.  ‘The Clerk said that with Miss Naish and Mr Boyd the plans to replace Mrs Horam’s cottage with 2 cottages had been considered.   If the present plan was carried out the second cottage would break the line of houses and from the Green would block out a large part of Leigh Church.  The Committee had told Sevenoaks RDC that any future roof line should not be higher than the existing line.  After a discussion on planning applications, Mr Jones proposed and Mrs Cecil seconded ‘that the Clerk should ask Sevenoaks RDC if longer time would be allowed for consideration of planning applications, etc’

Letter from Sevenoaks RDC agreed with the Council’s views on proposed development at Church Hill and refused permission.

Mr Wells said traffic to new building site is causing damage to Church Hill before building starts.  The RDC to be told.

Mr Parfitt asks what progress had been made in tidying Church Hill.  It was agreed to meet surveyors again to discuss position now development is completed.

Therefore, at some point during 1971/72 an agreement had been reached to replace the cottage and the one cottage – the bungalow – was built, the work being completed by September 1972.

The above minutes refer to one cottage at Church Hill in 1970 and one household occupier.  But there were originally two households occupying two cottages:  so at some point the two cottages had been combined into one residence.  We do not know when this was done, but we can look into the background of the cottages and the site at Church Hill at least into the 19th century.

The censuses, the early Ordnance Survey maps and the 1841 tithe apportionment map show that there were two attached cottages on the site with two separate households.  Also the cottages are shown as part of the land and property of the village shop/post office (at Great Brooks).

For some of the 18th century and much of the 19th century, the Shop and later shop/post office at Great Brooks was run by the Humphrey family who expanded their grocery business into Hildenborough in the mid-19th century.  The Humphrey family was in Leigh for almost 200 years, at one time blacksmiths and later shopkeepers.    (Sarah Harbroe sold Great Brooks to Robert Humphrey, shopkeeper in 1821 – see below).  When John Humphrey Sr died in 1875, his son, another John Humphrey (1843-1887), who had been running the Hildenborough shop, leased the Leigh shop at Great Brooks to William Anderson.  The business was eventually sold to William Anderson in 1887 following the death of John Humphrey in 1887.   Whether the two Church Hill cottages were also sold on to William Anderson at the same time is not clear and further investigation needed.

Moving back from the 20th to the 19th centuries, we can see the inhabitants at Church Hill Cottages.

1911 census: we have two cottages called Church Cottages at Church Hill, both of 3 rooms, i.e. a kitchen and two other rooms (excluding a scullery, lobby, closet and bathroom), one occupied by Sidney Ford and one by E R Spice.

1901 census: the cottages were occupied by Stephen Upton and William Ford (both consisting of 4 rooms, although not stating what was meant by 4 rooms)

1891 census: both these four roomed cottages were occupied by Stephen Upton and William Upton.  The address is purely given as the village, but are located in the census next to William Anderson’s shop.

1881 census:  the address is given as Church Walk: no further details: the occupants would have been George Everest and Henry Welfare

1871 census: one of the cottages was inhabited by John T Faircloth; one was uninhabited.

1861 census:  it is not so easy to determine the actual properties by the names we would be familiar with and therefore they are determined purely by a process of elimination: it looks as if the two cottages in the census would have been Church Walk cottage 1, occupied by William Foreman and Cottage Walk cottage 2, occupied by James Kingswood.

1851 and 1841 censuses: again difficult to determine which are the two cottages and therefore their occupants, and it is impossible to tell from the 1841 census.  The only clue we might have comes from the 1841 tithe map and tithe apportionment:  these show the cottages and the list of occupants refer to them as no. 61 on the map: two cottages and gardens, owner:  Robert Humphrey (who ran the shop at Great Brooks) and the tenants were William Peckham and others.  However, I cannot find William Peckham on the 1841 census for Leigh (although Robert Humphrey is there).

Going back further in time – if the cottages existed pre-1841 – they along with the land which formed part of Great Brooks and would be copyhold properties.  Great Brooks is mentioned in the Manorial Records of the Manor of Leigh Hollenden.  But the actual occupiers/tenants of the cottages would not be clear.

The property which includes the shop and the east side of Church Hill had been known as Great Brooks for many centuries.  The Manorial records show that in 1750 the ‘owner’ of Great Brooks was James Young, maltster of Westerham.  By 1778 he had passed his interest to John Crowhurst on whose death, Great Brooks passed to his widow, Mary Crowhurst.  By 1802 Mary Ann Crowhurst had sold to Sarah Harbroe of Hall Place (Sarah Harbroe, daughter of James Farrant of Leigh, was a sister of Mary Saint – wife of William Saint and mother of Emily Saint who married the Leigh Vicar Thomas May  – see May Family Tree).   Sarah Harbroe was wife of James Harbroe, and formerly married to Robert Burgess of Hall Place which she had inherited.  When her second husband, James Harbroe, died in 1820 she sold Hall Place to Thomas Baily (1821).  At that time she also sold Great Brooks to Robert Humphrey, shopkeeper.

Chris Rowley “We Had Everything … “

Wills: various of the Humphrey family