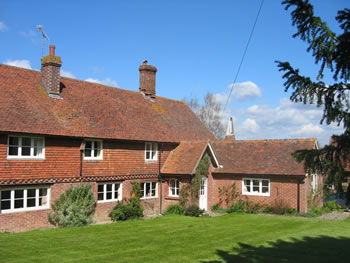 Deriving its name from the cinder waste which was produced by the burning of iron ore in the mediaeval “bloomery” which once existed there, the hamlet of Cinder Hill now comprises Cinder Hill Farm, Nos 1-6 Cinder Hill Cottages, Park Farmhouse, Foxwold (formerly Blackhoath Cottage) and Little Moorden. Most of these properties are, or were formerly part of, the Sidney family’s Penshurst Estate, but Cinder Hill Farm and Little Moorden were in separate ownership.

In 1565 Cinder Hill Farm (sometimes known as Gilwyns) together with seventeen acres was owned by John Colleyn. By 1602 it had passed to his daughter Ann and she then leased it to her son John Mylls, reserving for her own use “the three upper chambers in the north end of the mansion house”. This indicates that there was a far more substantial house on the farm than exists present house was probably built in the second half of the seventeenth century.

By 1636 the farm had passed to John Mylls daughter Ann Ashdown, whose husband was related to the Streatfeild family of Chiddingstone and by the early eighteenth century the ownership had passed on to them. In 1713 they commissioned a map of the farm which showed it still had seventeen acres, including a small hop garden, but no oast. By 1750 it was owned by the Children family and as a result of George Children’s bankruptcy in 1813, both Cinder Hill Farm and Little Moorden were acquired by William Wells as part of his Redleaf estate. Following Wells death in 1847, the estate was sold to Frank Hills whose descendants still own much of it. Cinder Hill farmhouse was sold separately from the remainder of the farm in 1957 but the purchaser was later able to acquire the farm buildings and some of the original land.

From 1600 until it was sold to the Redleaf estate, the farm was always tenanted and because of the small acreage the tenancies did not last long. The livestock in 1865 comprised 6 draught horses, 4 cows, 12 sheep, 2 pigs and sundry poultry, according to an auction catalogue. From the list of deadstock it is clear that the main farming activities were the production of hops and cereals. The catalogue makes no mention of an oast house, so this was presumably built later.