Noel Jempson, Powder Mill Carpenter and Landlord of the Plough 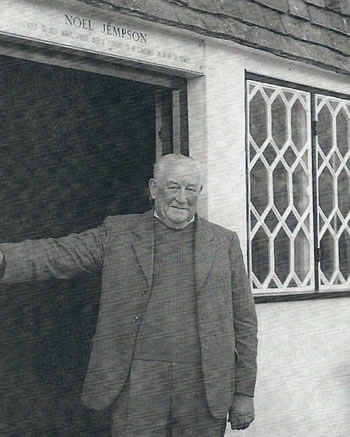 Noel Jempson, who with his father and his wife, was the Landlord of the Plough for around 85 years and was a long-term carpenter at the Powder Mills.

Noel was born in 1886 and, soon afterwards, his parents moved to become Landlords of The Plough. His father was a keen fisherman and in 1890 he caught an 18lb pike which, for the next eighty five years, was displayed in a glass case in the bar. Noel went to Leigh School and when he left he started a five year apprenticeship with a Tonbridge builder. He worked a 56½ hour week at a starting wage of 2d an hour. The rate gradually increased as his proficiency as a carpenter improved to 8d an hour. However, these were the days when a pint of beer at the Plough cost 2d (and the famous cider 1½ d).

Noel moved to work at The Powder Mills in 1906 as a carpenter. It was then owned by the gunpowder manufacturer Curtis’s and Harvey. He was initially paid 8d an hour, again for a 56½ week. At this time Curtis’s & Harvey employed around 80 people, including a good number from Leigh. A large proportion of Noel’s time was spent in the repair or reconstruction of the sluice gates by which the flow of water to the water-wheels was controlled. Pitch-pine was the wood mainly used, although other specially selected woods were used to make the wooden gears by which the water-wheels drove the 5 ton mill stones that in turn ground the charcoal, the sulphur and the saltpetre.

When the Powder Mills were wound down in 1934, Noel was able to devote himself not only to The Plough but to dairy farming in partnership with his brother-in-law. The Powder Mills site was bought by the chemical company, Menley & James in 1950 and Noel was invited back. Clearly he was an excellent worker, because he did not retire until he was 77 in 1963. It was in the years between 1963 and his death in 1975 that many in Leigh will best remember him, behind what was his own domain – his bar at The Plough.

Noel is buried in Leigh churchyard along with his wife, Violet. They may have been from a different era but it is good to remember people of such character.