Oasts in Leigh  by Geoff Dalby, based on a presentation given to the Leigh Historical Society (ca 2005)

“Of all the different types of building to be found in the Garden of England, the most immediately recognisable as Kentish is undoubtedly the oast-house. The tall conical roofs with the white cowls have seemed such a permanent feature of the landscape that it is perhaps surprising to learn that this kind of oast was a nineteenth century innovation and enjoyed a vogue of little more than one hundred years…” (from the flyleaf of Robin Walton’s book, ‘Oasts in Kent’ published by Christine Swift, Maidstone, in 1985)

Not all historians, however, take such a generous view of oasts as Robin Walton. Lawrence Biddle, for instance, makes only two casual references to them is his book (Leigh in Kent 1550-1900) which, on all other matters, is crammed full with Leigh history. Maybe it’s because their history is difficult to trace – no deeds, no conveyances, in fact no certainty about anything beyond living memories. Like most old agricultural buildings, they were erected at the whim of the farmer to respond to the needs of the day. Most have been converted to dwellings in a way which many historians would abhor – and those which have not been saved in this way are in a serious, if not irrecoverable, state of decay. As a result, we are reliant on certain of their physical features and old maps to understand more of their past.

The word oasthouse derives from the Latin ‘aestus’ meaning heat. Possibly the earliest record of an oasthouse is in a book published in 1574 by one Reynolde Scot entitled a ‘A Perfite Platforme of a Hoppe Garden’. It seems that the 16th century oast was nothing more than a wooden structure 18 ft. x 8 ft. and 9 ft. high with the drying floor only 5 ft. off the floor. This style of oast remained relatively unchanged right through to the middle of the 18th century and it was not until the end of that century that brick construction was introduced, albeit with 12-16 ft. square kilns and pyramid roofs.

The source of heat in these days was barely more than a pile of coal on a simple hearth and the square kiln was found to be inefficient in terms of heat transference up the kiln to the drying floor (note: no design, just trial and error). Enter the roundel with a conical roof in the early 19th century! Now we all know about governments that are quick to extract fiscal revenue from industrial development. Well, this rapid development of the use of bricks (not only in oast construction but for all forms of building of the day) caused the government of the day to impose a brick tax in 1784. This had the effect of slowing the migration to brick kilns and, for a while, a number of hybrid structures were built (part brick and part timber). Increased efficiency in heat generation, including the introduction of more sophisticated furnaces, caused many of the wooden upper parts to catch light. It is said that this is why so many oasts are located very near water sources: lakes, ponds, streams, etc. (e.g. Leigh Park Farm).

In 1850, the tax was abolished, and all-brick construction really took off, as did the hop industry generally. In 1800 there were some 35,000 acres of hop growing in Britain; this crept up to 45,000 by 1850, then practically doubled by the mid-1870s and dropped back to 15,000 by the turn of the century. This also explains why most of Leigh’s oast-houses were built in the middle of that century. Kent contributed two-thirds of the total national acreage, the rest being divided between Sussex, Herefordshire, Hampshire, Worcestershire and Surrey.

It might be concluded from the above that all square kilns pre-date roundels. This is not the case because all bright ideas have their day and, by the end of the 19th century, with the development of furnace design and heat circulation, the square kiln returned making the lives of bricklayers and roofers much easier. Most square kilns you see now are of this later period.

Another clue to the age of an oast is the style of brickwork. Most structural walls of this period were laid 9 inches thick with no cavity (the science of heat conservation had yet to come!). Two lines of ‘stretchers’ (bricks laid with their longer sides showing) were interspersed with ‘headers’ (bricks laid across the stretchers with their ends showing) which gave the wall strength by binding the inner and outer courses together. In the 18th century, bricks were laid to English bond (alternate rows of headers and stretchers) or English Garden Wall bond (three rows of stretchers followed by one row of headers). Whilst arguably stronger, more functional and easier to lay, the English bonds were largely replaced in the 19th century by the more decorative Flemish bond (alternate headers and stretchers in the same course) and Flemish Garden Wall bond (three stretchers between each header) – Victorian England supposedly was suddenly becoming more conscious of aesthetics! All oasts in Leigh are built in one of the Flemish bonds and most include dentelles (protruding bricks, often set at an angle, in the course immediately below the roof).

Whilst the external appearance of oasts is still much in evidence, sadly not much remains of the original internal features that can help us with age. Much has been lost in the process of conversion and equipment like furnaces, hop-presses and even cowls have either been lost or replaced over time.

The final tools for ageing an oast are, of course, the maps of the period. These maps, however, were not of the standard of cartography that we are used to today and we cannot rely totally on the shape of the blob that depicts a building on a map, truly representing its actual footprint. This is particularly true of the 1841 Tithe Map of the area, the source of much so-called authoritative historical opinion. The 1870 Ordnance Maps for the area are more reliable and record three years of intensive surveying with far more sophisticated tools being available. These maps (most of which are available for inspection at the Centre for Kentish Studies in County Hall, Maidstone) generally show the number of roundels on each oast and we have to assume that this represents what was on the ground in the late 1860s. It appears that a single kiln, whilst sufficient up to that time, may have proved inadequate to deal with the massive expansion in the industry in the 1870s and, in most cases, a second roundel was added to improve throughput. The subsequent version of the OS. maps in 1908/9 show these additions.

A typical oast-house comprises one or more kilns (known as roundels in round oasts), a barn and a loading gantry. Green hops were transported from the fields in large sacks known as ‘pokes’. The pokes were hoisted on to the gantry which was level with and had access to the first floor of the barn. From here the hops were moved into the drying area – a slatted timber floor in the upper half of the roundel. The lower part of the roundel formed the kiln in which fires of anthracite, brimstone, etc. provided the heat to dry the hops. The heat was drawn up the roundel and through the conical roof by an open cowl, designed to rotate and face the lee side of the wind. After drying, the hops were laid out in the cooling room situated on the upper floor of the barn before being shovelled through a hole in the floor into ‘pockets’ – large sacks used for transporting the hops to the brewery. Above the hole a large press – resembling a giant mangle – controlled a long plunger which was lowered into the pockets to maximize the contents of each pocket.

In the civil parish of Leigh, there are ten oasts, all but one of which have been converted for residential purposes. A brief description of each can be found by clicking on the appropriate name, travelling clockwise around the parish from the east.

And so ends this tour of Leigh’s ten oasts – and not a hop to be seen being processed in Leigh. But one doesn’t have to travel far to find a modern plant. Local farmer, Colin Bastable, has until recently run a modern oasthouse in Poundsbridge.

Here one is greeted by two unbecoming metal sheds joined by a conveyor belt – very practical, but without a sniff of the romance encapsulated by Robin Walton’s book and the text for this article. In the first shed, a series of conveyors which sort and clean the incoming hops and transport them to the drying shed without a human hand involved. 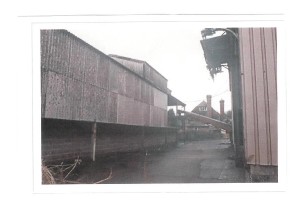 Surprisingly though, in the drying shed the process replicated much of the old Victorian oast. Large bins, each with a coarse mesh floor covered with a hessian cloth, received the hops. These are driven by electric motors over a succession of heating chambers, each warmed to a different temperature by modern air heaters, the final chamber being a cooling chamber to overcome the problem of the dried hops sweating at the end of the process. At the end of the run the hessian is withdrawn and each bin discharges its contents on to a sunken floor from which they are swept into a rectangular press which seals them into modern-day pockets ready for dispatch to the wholesalers – into a market dominated by imported hops from Germany, Eastern Europe and the USA.

In the drying shed

And finally, the oasts which didn’t survive

Doubtless, over the centuries Leigh boasted more oasthouses – some probably predecessors of those that still survive, others on farms which, for one reason or another, did not survive.

It is interesting to note that the 1841 Tithe map shows a parcel of land on the corner where Coppins Road and Scabharbour Road meet titled Oast Meadow. This land would appear to be within the curtilage of the former Little Coppings Farm but there is no sign of an oast-house (or indeed a farm!) in this location now. Another example is the now wooded ground on the edge of the Penshurst estate opposite the junction of Cinder Hill with Penshurst Road which was depicted as Oast Field. There are some derelict brick buildings along the track that runs along this ground but no sign of anything resembling an oasthouse. Yet another (plot 36 – see Lawrence Biddle’s book, page 123) is depicted as Meadow and Oast House, in Powdermill Lane opposite The Green.

It is a shame that Leigh has no oasts older than the 19th century. Their predecessors appear to have sunk without trace or record. At least the conversion of those that have survived has forced their recording with Land Registry and, whatever their future, the sparse details of their history will be there for future generations.

Footnote: I do not profess to be an expert on Oasts. Any knowledge I have has been gleaned from reading published material on the subject and from having converted and lived in one for the past twenty years. If you can offer additional information or even corrections, please do not hesitate to let me have them and I will hope to include your contributions in any future revisions to the website.