↓ Skip to Main Content
Home › Around the parish and MAPS › High Street South Side – East to West; North Side East to West; and Lower Green › West Lodge

West Lodge (or Penshurst Lodge) marks the end of the west drive from Hall Place.  The lodge was built rather later than Hall Place, on land which Samuel Morley had bought from Lord de Lisle in 1875, and replaced two earlier cottages.  It was designed as a free-standing lodge by George Devey.

In 1906, to mark the coming-of-age of his eldest son, Samuel Hope Morley moved the disused gateway which stood alongside Pinnacle Lodge (and can be seen on the front page of the Hall Place 1870 Sales Particulars) and re-erected it at West Lodge, rebuilding the south front of the Lodge to acommodate it.  None of the original Devey lodge can, therefore, be seen from the road.  The architect employed for these alterations to the lodge was M. Maberly Smith, the son of the Rector of Penshurst and the architect for Penshurst Village Hall. 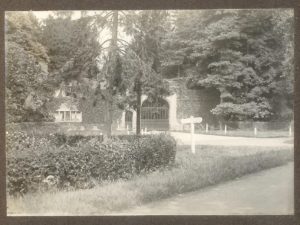 West Lodge. Photograph from the album of Rev. Octavius Walton (Vicar of Leigh 1906-18) 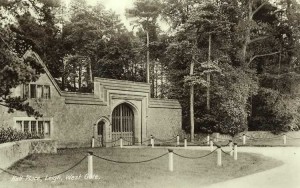