The funeral took place on Wednesday at Leigh church of Mr George Henry NIXON , of 11 Powder Mills, who died on Friday, aged 31 years.

Born 10th October 1910 in Leigh. The eldest son of Charles and Elsie Nixon who had a family of five daughters and two sons. He lived at the Powder Mills with his parents and worked as a gardener in Hildenborough. His brother Gilbert was killed in the war six months later. 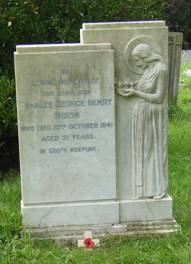