Until the nineteenth century Hall Place owned no land outside the park and it was probably no larger than an average farmhouse. A circa 1600 map shows it surrounded by a number of barns and outhouses. We know of three houses on the site – this one, the Georgian mansion and the present house.

Hall Place was granted by Henry V1, as part of the Penshurst Estate, to Humphrey Stafford, Duke of Buckingham. The estate was forfeited to the King when his son fought against Richard 111. The property was reinstated to the family by Henry V11, but forfeited again in 1521when Edward Duke of Buckingham was accused of conspiring against Henry V111. It was acquired by his steward, Knevett, who had given evidence against Edward and he sold it to Mr. Burnett of East Wickham. Yet again it reverted to the Crown and was then granted to William Waller of Groombridge Place who in turn gave it to his son, Richard. Henry Cruttenden inherited it from Richard’s daughter, Margaret, and passed it to his son, Henry, and from there it entered into the ownership of the Harrison family. During this time it was tenanted. The most notable of these tenants was William Heath, who bought the freehold from James Harrison and passed the house to his sister, Elizabeth who was married to Isaac Burgess. Their son, Robert, pulled down the existing house and built the Georgian one in 1780.  (Robert also bought Groombridge Place).

In 1785, then aged 60, Robert Burgess married Sarah Farrant (aged 23).   When he died in 1794, he left no children.  Sarah continued to live there and married as her second husband, James Harbroe of Sundridge.  In 1820, James Harbroe died and Sarah, having been widowed twice,  sold Hall Place to Farmer Baily whose family owned it until 1870. Thomas Baily added a gothic hall to the east end of the Georgian house – 70 feet long with projecting bay windows at the east end – which was used to entertain the tenants. The Architect for this project was probably Charles Baily, a second cousin. The north end of the house was also rebuilt with gothic windows and a gothic room. This room survived the later demolition and was re-erected in the Home Woods in 1870. It was at this time that the lodge on the north side of the drive beside Porcupine House was replaced by the present East Lodge and the ornate gothic gateway was built. A similar gateway, later rebuilt it West Lodge, and the Pinnacles, or Old Lodge, were also constructed at this time. Rides were laid out in the woods along with a summer drive to Stocks Green and a water pipe along the line of this drive led to a dam which was probably the the site of a hydraulic ram to supply water to the house to supplement the well at Hall Place.

Samuel Morley purchased Hall Place in 1870 for £42,000 (plus furniture and fittings) and paid an additional £230 for the deer herd. Details of the 1870 sale catalogue for Hall Place are available for viewing (contact the Society).

The images available are given at the bottom of this article.

The following year (1871) he decided to demolish the house and appointed George Devey to design a new one. This Victorian building was rambling and picturesque with a courtyard for stables, coach house and cottages. It was completed in 1873. The baronial hall was moved and rebuilt as a non-conformist chapel. In 1874 the Home Farm buildings were rebuilt and West Lodge was constructed. The creation of the lake was carried out by direct labour and in September of that year the boathouse was thatched and a boat bought. The house was furnished by many of the best known Victorian firms, the largest contract going to Jackson & Graham. The organ was built by Hill using a pump driven by a water engine; and a large billiard table was installed. An improved gas and water supply was laid for the house, which also benefited the village, as did the proper drainage scheme. Samuel Morley died in 1876 and was succeeded by his son, Samuel Hope Morley, who added Leigh Park and Prices farms to the estate. He was made a peer in 1912 and took the title of Lord Hollenden. In 1925 he passed Hall Place to his son and the house is still in the ownership of the family, although at the time of writing (April 2015) its future is unclear.

Alfred Houghton became Estate Clerk in 1925, then Agent in 1940 and continued in that position until he was 93.  He died in 2003.  His first wage was £2.10.0d a week There were around 60 staff on the estate plus about 12 house staff and 18 in the garden. When the first Lord Hollenden died in 1929 the estate was worth £1.5 million. There were 20 acres of garden including 12 and a half acres of lake, with a large rose garden and pergola, two tennis courts, 18 greenhouses and a conservatory. Lord Hollenden owned most of the houses in the village as well as about 50 cottages, the blacksmiths and most of the shops. He owned the water, electricity and gas supplies, the drainage system, the Village Green and the Village Halls. From the 1960s the estate began its policy of cutting back on its staff and selling off the houses, farms and property. In 1964 the last staff at the gas, water and electricity stations were paid off, the deer herd having gone the year earlier.

In 1940 there was a serious fire at Hall Place caused by an electrical fault and a wing of the house was badly damaged. In 1977 this area was turned into a house garden by the late Lord Hollenden, and members of the family still live in part of the house.

In the Leigh Historical Archives is a photocopy of Conveyances in respect of properties and land formerly held by Hall Place.  The Law of Property Act of 1925 changed the way that land was held and abolished tenure by copyhold.   In 1926 various Deeds were entered into by the Hope-Morley family as Trustees:  gradually over the next 50 years or so former copyhold properties held in Trust by the Hope-Morley family were sold off to  tenants.  The Conveyances contain dates of transfers and names of properties and tenants, plus some maps.

Also in the Leigh Historical Archives there is an article dated 15 December 1900 from Country Life Illustrated entitled Country Homes and Gardens Old and New which is about the garden at Hall Place as it was in 1900 when Samuel Hope Morley owned Hall Place.

A Child at Hall Place 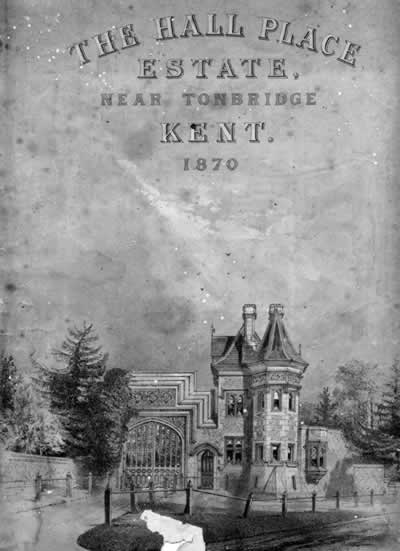 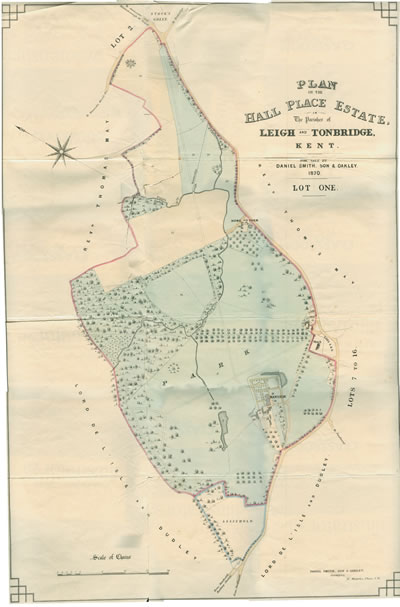 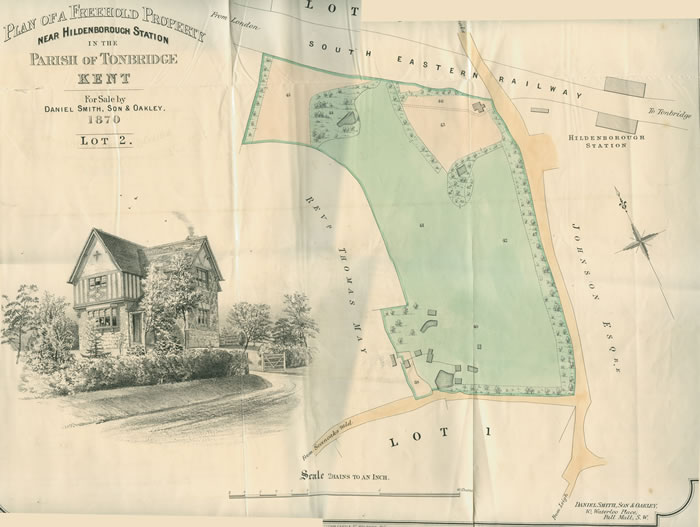 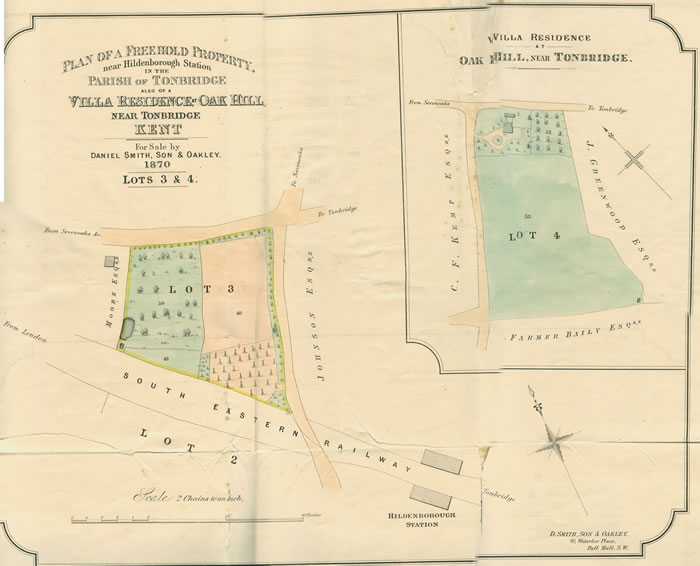 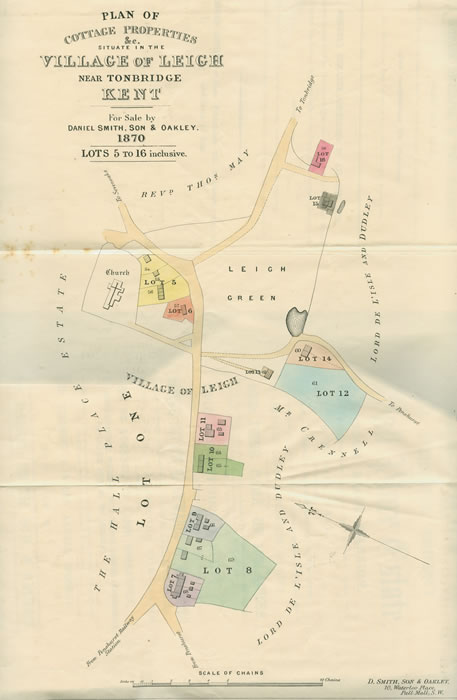