On the east side of Forge Square is South View which was built about 1890 – completed early 1891 – as it is shown occupied in the 1891 census and also from dates of architect’s drawings.   South View was originally built as a convalescent home when it was known as Cottage Home.  (More to come).

Ernest George and Peto were the architects: the house is also in Tudor style, with tall chimneys and an irregular form. It has a high pitched tiled roof with tall red brick chimneys. There are decorative half timbered walls with roughcast filling. There is a red brick plinth which rises to the ground floor cills. To the road, it is narrow and of 1 storey and attic, 1 window under wide overhanging gable with carved beams. There is a similar and taller gable, with double overhang, on the right return. There are carved bargeboards and visible beam ends to the overhangs. There are 4 and 5 light wood mullioned windows, some in square bays. On left return, there are first floor oriel bays and a recessed entrance.

In what is now part of the garden of South View, leading out of the village, there used to be three cottages and a garden against the churchyard wall. On the death of Richard Brook in 1665 these passed to his three daughters; they were then sold to William Saxby of Ramhurst. In 1676 he created a trust for the poor of Leigh and transferred the cottages to the trustees (see Leigh Parochial Charities). The print on page 134 of Lawrence Biddle’s book shows these cottages with the east end of the church in the background. By the middle of the 19th century they were in poor condition and were pulled down and replaced by three attached cottages. In August 1913 Samuel Hope Morley gave the charity trustees two cottages on the south side of the Green in exchange for these and then pulled them down to create a garden to enhance the approach to the village – which now forms part of the garden at South View.  (see Deed of Exchange dated 1st August 1913)

In the front garden at South View at Forge Square, there is a stone slab by the hedge which probably covers up an old fountain which supplied water to the village.  Water was pumped into four reservoirs in the village and one of these reservoirs, behind the Stone House, supplied the four fountains in the village, one of which was in Forge Square (see article The Engineers Department at Hall Place).

When originally built, Forge Square and South View were all thatched; however, the thatch was subsequently replaced by tiles after 1920.

Copies of the architect’s (Ernest George & Peto) plans of South View are stored on CD (Disk 10 – in archives). 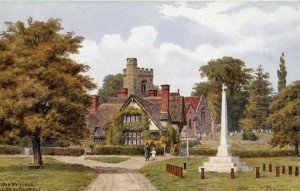 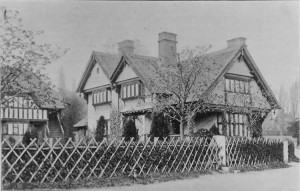 South View, date unclear: Originally built as a convalescent home in about 1890 by the architects Sir Ernest George and Peto. Photo from The Studio, vol. 10 p.179 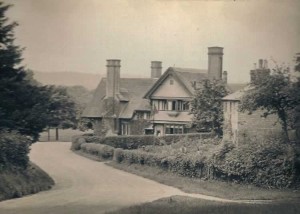 Parish Charity Cottages (on right) and South View. The Charity Cottages were built about 1865 by the Vestry and were demolished ca 1913 at the request of Samuel Hope Morley who provided Chestnuts (new) and Nos 1 and 2 Cherry Tree Cottages instead.

View towards South View and Church, showing footpaths across Green plus horsedrawn vehicles – ?post 1913 as cannot see the charity cottages which were pulled down sometime after 1913. 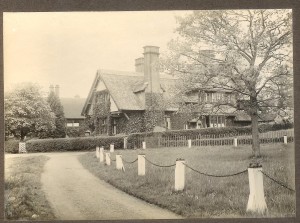 Towards South View from the Vicarage pre-1920. Note the house was still thatched. 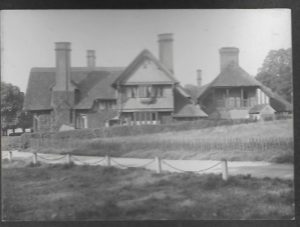