According to Lawrence Biddle in Leigh in Kent 1550-1900 (p.132), Great Boydens, sometimes called the Row, was the property to the east of the Forge and consisted of a block of three cottages and two semi-detached cottages.  In 1750 it was owned by James Young of Westerham.  It was sold in 1765 to John Crowhurst.  He sold it in 1769 to Samuel Mills who had substantial estates centred at Poundsbridge in Penshurst.  In 1781 Samuel Mills sold to Thomas Nightingale who died in1817, leaving the property to his son, Thomas, who was still owning it in 1840. At some date before 1846 he sold to William Constable.  When he died, Great Boydens passed to Henry and Humphrey Constable.  In November 1867 Joshua, the heir to Henry, and the executors of Humphrey Constable sold to Thomas Baily.  These cottages then formed part of the 1870 sale to Samuel Morley and were pulled down when Forge Square was built.

However, further information on the cottages that formed the Row/Great Boydens can be gauged from the 1870 Sales Particulars of Hall Place as well as a pastel picture that has come into the possession of the village by Edith Hine.   When the new homes were erected at Forge Square (along with South View) they replaced the seven cottages previously known as the Row or Great Boydens.  The cottages are described under Lot 5:

Firstly a pair of cottage dwellings under one roof, with 9 rooms, no. 54 on the plan – which in 1870 was occupied by Richard Tidey (5 rooms) and George Sales (4 rooms);

Secondly, a further detached cottage dwelling situated close to this with 5 rooms, no. 55 on the plan, occupied by William Shoebridge.

All these three buildings  can be seen on the Edith Hine pastel which was probably painted around 1888.  Edith Hine was a daughter of Mrs Agnes Heath who lived at The Woods).   On 1 October 1887 Edith Heath married William Egerton Hine at Leigh:  hence as the picture is signed Edith Hine, it is unlikely to have been painted earlier, but would have had to have been done before the erection of the new Forge Square and South View.  Edith Hine, in the 1901 census, is staying at the Woods (then known as The Cottage) and describes herself as an artist/sculptress.  Her picture is below, and describing it face on, the three separate buildings which formed the Row can be seen to the left of what would have been the Vestry’s charity cottages and at the furthest left in the picture and indistinct would be the Forge.  The road would not have been a made-up road as today, but more a track which went down towards Powder Mills. 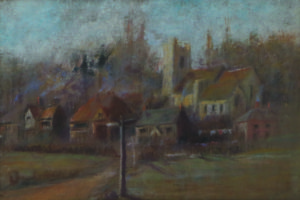 View towards Leigh Church, ca 1887/88.
Before the erection of South View in 1890 and the new Forge Square of 6 cottages (7 homes) ca 1888-1890. It is the only picture we have which shows the layout of the cottages at that time. The charity cottages are there; then there are three buildings which appear to consist of one small cottage, plus two larger cottages which would have been known as Forge Row and provided accommodation for 6/7 households, at the very end of the picture, quite indistinct, is the Forge.