Private 24388, 104th Heavy Battery, Royal Garrison Artillery. Enlisted Maidstone, Kent but resident in Charcott. Gained two campaign medals. Died 31st December 1916 aged 35. Remembered on the Basra Memorial, Iraq. Twenty-five members of RGA are shown as dying on the 31st December 1916. This is because after surrender at the end of the siege of Kut on the 16th April 1916, many died as prisoners of the Ottoman Army. As the actual date of death was not known it was recorded as the end of that year.

Born at Speldhurst, Kent in approx. 1885. Son of Thomas and Margaret Young of Charcott, Kent. The 1901 census shows Mark working as a Carter’s Mate age 16. He lived with his parents, three brothers and a sister. 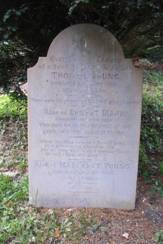