Born Pagham, Bogner, Sussex. Son of Mr. and Mrs. T. V. Janman of the Manor House Aldwick, Bognor, Sussex, where his Father worked as a gardener. Shown in the 1915 Electoral Roll as lodging with Mrs Page of Chiddingstone Causeway. 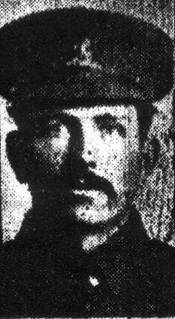 On September 27 th the Germans made two strong bombing attacks on a potion of the recently captured trench held by ‘C’ company of the 7 th Royal West Kent Regiment. During the second of these attacks he was seen to be badly wounded in the left side by a piece of bomb or a bullet. His pontoon Serjeant Munro assisted him towards a dugout, and says he was again hit in the arm and leg by bullets. Serjeant Munro had, of course, had to return to his pontoon as soon as he got Lance-Corporal Janman a little way back. Here is no definite news beyond that , but I have heard, adds Lieut. Hogg that he was seen either dead or dying from his wounds. Though this last is not first hand information. I fear it must be true, and that there was little hope of his having recovered from the wounds he had received. “I should be grateful if you would convey the most sincere sympathy of the officers of his Company to his mother. He was a most valuable N.C.O., and is much missed by his Company. During the course of both of the bombing attacks made on the Company (which were repulsed with heavy losses to the enemy) he showed the greatest courage and determination, and if this would bring some pride and joy to his mother in the midst of her great sorrow I should like her to know it.”

Lance-Corporal Janman was 29 years of age, and enlisted in the 7th Royal West Kent Regiment in 1914, soon after the war broke out. He was a native of Bognor, where his mother resides, and was unmarried. He was for some time employed as a gardener at Knotley Hall, the residence of Lady Harriet Warde, but at the time of his enlistment was in the gardens at Penshurst Place. He was a member of the Leicester Lodge of Oddfellows, Penshurst, and his untimely death is much deplored by those who knew him.