↓ Skip to Main Content
Home › History › Flooding – Leigh and Medway: from 1600 to present › A Myth Exploded: The Flood Barrier

A Myth Exploded: The Flood Barrier

A Myth Exploded: The Flood Barrier

I had always been told that, when there was the exceptionally heavy rain at Christmas 2013, the water came within 3cm of the top of the barrier; and that, unless the Environment Agency had let out a large amount of water, the whole structure would have been in danger. Others in the village have also heard this as ‘a fact’.  The story turns out to be untrue.   When the Historical Society visited the Environment Agency in June, we were told the real facts and the background.

After the disastrous floods of 1968, an Act of Parliament was passed in 1976 to approve the barrier. The Act stipulated that the maximum depth of water at the Weir was to be 27 metres.  Yet the barrier was built to allow for 28 metres.  So on the Christmas Day when the height reached 27 metres, the Environment Agency felt that they had to stick to the Act of Parliament, even though the flood plain could have stored around an extra 40%.

The new 2021 proposals for the barrier which, when fully approved, will allow for this extra water. The barrier will NOT be raised.  It will be strengthened in some places, although the work will not show when the grass re-grows. The only addition will be an extension on the northern side to protect Hildenborough. 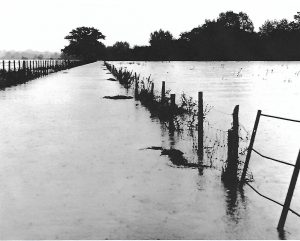 Flooding 1968 -from first bridge Powder Mills to Tonbridge footpath, looking down the footpath. 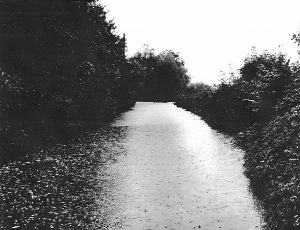 Flooding 1968 – the road leading to the Plough