THE BAND OF HOPE AT THE BEGINNING OF THE LAST CENTURY

Leigh had a very active Band of Hope, certainly from the 1880s or 1890s until the First World War and maybe beyond.  The Band of Hope was a national movement which by the end of Queen Victoria’s reign had over three million children.  The movement had been started in the middle of the century to help children from the massive ravages of alcoholism where children were not only abused and abandoned by drunken parents but took to drink themselves.  The aim of the charity was twofold – to give the children entertaining things to do including outings but also to talk about the evils of drink and give generalized Christian messages.

Leigh’s Band of Hope clearly did both.  The Kent & Sussex Courier has two 1906 articles which illustrate the good work being done.  “On Tuesday June 5th the members of the Band of Hope took tea in the Vicarage Grounds, kindly lent for the occasion by the Rev. H. R. Collum.  Games and sports were indulged in with great zest until seven o’clock, when the party, numbering about 60, adjourned to the Iron Room for a musical entertainment.  The dialogues, in character, “After the Harvest” and “Management” were extremely well rendered by the following members:  Dudley Pankhurst, Arthur Waite, Charlie Hayter, Alice Hayter, Elsie Young, Emma Gardner, and Daisy Stubbings.  The musical portion included a song by Mabel Orrom, who has a voice of great promise, and a very well-played solo by Alan Young, with a duet by Mrs Pierson and Nora Card.  The Rev. H. R. Collum, in a few well-chosen words, wished still more success to the Leigh Band of Hope in the future, and remarked upon the number of members – 83.  A vote of thanks was passed to Miss Collum and all those who had assisted over the past year.

Leigh’s older Band of Hope children had an outing to London – and an exhausting day it sounds. “On a beautiful morning the party assembled at Hildenborough Station, where special carriages were reserved.  Upon reaching the Metropolis, the National Gallery was first visited, and much impression was made by many of the magnificent pictures there.  The next place of interest was Westminster Abbey, where ancient writings, seals, carvings, etc excited much wonder.  Next a trip by steamer to the Tower Bridge and back to Westminster was greatly enjoyed.  Then came a walk through Hyde Park, where ‘bus was taken for the zoo, and there the remainder of the day was most pleasantly spent.  After an excellent tea came the return motor bus ride to Charing Cross, the party tired, but happy, arriving at Hildenborough 9.25.”

(Further information can be found on the origins of the Band of Hope on Wikipedia).

Below is  a certificate from the Bank of Hope Union: 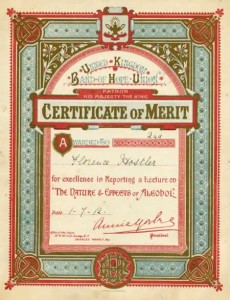 Band of Hope Certificate of Merit for Florence Hostler dated 1912 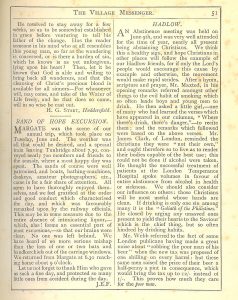