150 years of the Stubbings* (and Argent) Family in Leigh

Albert Stubbings “senior” was born in September 1851 at Walters Green near Fordcombe. His father Charles and his mother Mary were both paper makers all of their lives, most likely at Chafford Mill near Fordcombe as they lived at Chafford Cottages near the Mill. However, Albert, usually known in the family as ‘Bert’, did not grow up to work at the Mill, but instead he became a bricklayer.

In November 1878 Bert married Fanny Coulstock at St Peters Parish Church in Fordcombe. Fanny came from Chiddingstone and her father John Coulstock was an Agricultural Labourer. Bert and Fanny moved to Chiddingstone Hoath and their first two children, Henry (‘Harry’) and Jack, were born there. The Coulstock family still live or have connections with Fordcombe and Chiddingstone Causeway.

Bert’s next move was an intriguing one as sometime between 1881 and 1883 the family moved to Leigh where he took up a job at the Hall Place Estate Waterworks in what is now called Kiln Lane as a ‘Gas and Waterman’ according to the census. He clearly moved to Leigh specifically for this job and his bricklaying skills were almost certainly put to good use on the Estate.

When he moved to Leigh his address in the census was given as ‘Brickyard Road / Lower Green’. (The brickyard closed around 1913). It is quite possible that he actually lived in the Waterworks Cottages in Kiln Lane as this road did not have a name for many years, and could well have then been identified as part of Lower Green. Also, according to the census, Alfred Sales, the Foreman Engineer, at one stage lived at the Waterworks.

According to ‘Dick’ Wood in “We Had Everything”, “Alfred Sales, William Baldwin and Albert ‘Birdie’ Stubbings were three much respected men as they were the men in charge of the Gas Works and Water Works supplying Hall Place and the Estate property with gas and water.” ‘Dick’ notes also that the two Estate bricklayers also worked from the ‘old Gasworks’ adjoining the Waterworks, and this may be a further indication that Bert’s bricklaying skills were put to use when he worked there. It is interesting to conjecture why Bert was given the nickname ‘Birdie’!

Bert was very active in the Leigh Volunteer Fire Brigade, together with old village names such as Fred Faircloth and Fred Faulty. Indeed when Mary Faulty died her coffin which was made by Fred Faircloth – who was both the wheelwright and coffin maker – was lined by Mrs Faircloth with white velvet which was provided by the Fire Brigade. Indeed it appears that the Fire Brigade was available for a multitude of tasks including watering the cricket pitch when the summer was very dry!

Bert (‘Senior’) and Fanny went on to have seven further children born in Leigh – William, Albert (‘Bert Junior’), Lillian (‘Lily’) Rose, Walter, Edith, Daisy and May – the last being born in 1895. In 1911 they were still living in Lower Green with four of their children – Bert Junior, Walter, Daisy and May. In 1901 Bert Junior and two of his brothers, Jack and Harry Stubbings are shown in the census as gardeners, probably on the Hall Place Estate. Jack certainly was an apprentice there at the time, although some years later he became a ballmaker and then Steward at the Penshurst club. Bert Junior also became a ballmaker, probably one of the many who cycled off to Dukes at Chiddingstone Causeway every day, and he followed this job almost all his working life. Walter was an assistant baker and as they lived in Lower Green it is probably fair to assume that he worked at the bakehouse in Lower Green where Charlie Friend was the baker at about that time.

Bert Junior had been born in 1884 and lived in Leigh all of his life, apart from during the First World War. Bert, having started his working life as a gardener before becoming one of the many ballmakers in the village, married Flora Bessie Dennis during the First World War in February 1916 in Paddock Wood. It appears that he served in the Royal Engineers during the War. Flora’s father was a miller. In due course Bert and Flora moved into Ivy Cottage, 4 Barden Cottages on the Green in Leigh, as tenants to the Goodwin family at Paul’s Farm, and in 1920 they had a daughter Mary. However, tragedy was to strike in 1932 when Flora died at the young age of 41. Some time later, perhaps to help look after Mary, Bert’s sister Daisy move into Ivy Cottage with him. Bert Junior was also very active in the Leigh Volunteer Fire Brigade, taking after his father, and was also a keen bell ringer at the church.

Bert and Flora’s daughter Mary married Ben Fagg in Leigh (see photograph below). Sadly, however, another tragedy was in store for Bert, when Mary died before him in 1965 at only 45. Both Mary and her husband Ben have plaques on the Memorial Wall in the Leigh Churchyard. Bert died in July 1970 at the age of 85, and he and Flora are buried together in the Leigh ‘new’ churchyard.

Daisy had been born in Leigh in 1893 and in later life became known as ‘Aunt Dais’. She married a Mr Milliner and one of their children, Evelyn (Mrs E Argent), still lives in Leigh with one of her four children, Adrian and Adrian’s wife, Sandy. In the mid-1920s Daisy was living in half of Old Chimney’s on the Green with her mother, Fanny, and her daughter, Evelyn, who with Daisy, looked after Fanny, until Fanny died in 1939. Daisy must have then moved to Ivy Cottage with her brother, the widowed Bert, because it is known that together they took in one of the evacuees from London in 1939 – Eva Collins. The Faulty family remembers Evelyn as a child – mainly looked after by her grandmother (Albert’s wife Fanny) because Daisy worked in London. Evelyn had to remember addresses for letters she was carrying, so that the Post Master could write them on because her grandmother couldn’t write. “Evelyn was a pretty, golden curled little thing. She would be going along, repeating the address to herself so that she didn’t forget it.”

Evelyn Argent and Adrian and his family are the only known descendents of Albert and Fanny Stubbings still living in Leigh and so the ‘Leigh Connection’ has not yet been broken. Long may the link with this pretty village remain.

*Stubbings name is also found as Stubbins in some documents. 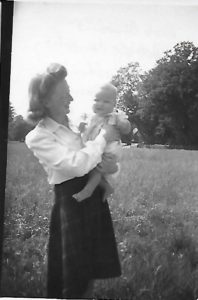