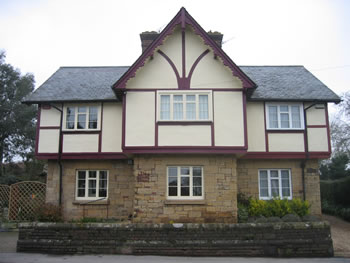 The Stone House and Park Cottage – formerly 1, 2 and 3 Park Cottages were built in 1865 on the instructions of Thomas Farmer Baily (born 1824), the owner of Hall Place. The architect was almost certainly Charles Bailey – a cousin – who designed East Dulwich Church and the iron gates at Woolwich Arsenal. However, Charles Baily’s main achievements are the numerous buildings he seems to have undertaken in Leigh. The initials on the Stone House (combining 1 and 2) are those of his second wife who he married in 1862 and it is possible that these three cottages were a present to her.

From the 1870 Sales Particulars on the sale of Hall Place to Samuel Morley, this single building is described a a highly picturesque building, in 3 occupations of 6 rooms each, built of stone, plaster, half-timbered and tile, with good gardens.  They are nos. 9 and 10 on the plan, containing 0a 1r 2p. They are let to David Killick, Thomas Faircloth and Thomas Young each at an annual rent of £12.

The exterior is virtually unchanged from when it was built and it contains interesting historical detail which is totally part of the unusual village High Street with its complex Victorian architecture. It was originally constructed as three cottages and it had three internal wells at one period. one of these was located inside the front retaining wall to the south of the garage and the second on the west side of No. 1 in the path to the side of the house (again the west) by the kitchen window. It was then converted to a single house and subsequently was divided into two dwellings.

What became 1 Park Cottage was occupied by the Fitzjohn family when they came to Leigh.  James and Susan Fitzjohn lived there until 1910, then their son, Fred and his wife, Emily.  Emily died in 1968.

These were the first properties to be auctioned by The Hall Place Estate in about 1969 or 1970.