↓ Skip to Main Content
Home › Around the parish and MAPS › High Street South Side – East to West; North Side East to West; and Lower Green › Pear Tree Cottage(s)

Pear Tree Cottage itself was the right-hand end of terrace cottage, seen in the photo below which was taken in 1953.  It was named as such because for many years there had been a pear tree growing up the side of the house.  This was no longer there when Sandra’s father (Harry Lucas) and mother and Sandra (later Nicholls) moved in but many nails used for the supporting wires remained.   The cottages no longer exist.  There was also a second terrace of cottages before Pear Tree Cottage(s):  all these cottages were pulled down and replaced by Saxby Wood in 1968/60.

In Chris Rowley’s We Had Everything .. p. 238 there is a photograph taken from the opposite direction, up from the Brickmakers Arms, which shows both set of cottages.  A copy of this photograph is given below. 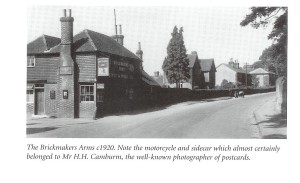 Brickmakers Arms, plus view looking up the Hill towards two terraces of cottages furthest in picture) which were pulled down to make way for Saxby Wood in 1968/69 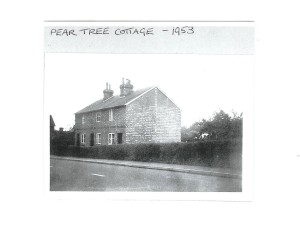