Oak Cottages are situated in the High Street, leaving the village in the direction of Penshurst.  They are situated next to the entrance of the allotments at Leigh.

From information received from Sandra Nicholls, the daughter of Harry Lucas, in the 1920s and 1930s Harry Lucas, Sandra’s father, her uncles Jack and Bernard and her grandparents lived at 1 Oak Cottages: at that time the roof of the cottages were thatched as seen in the two photographs below.   The second photograph – with the pram – was taken in the very early 1930s because it shows Harry Lucas’s youngest brother (Bernard Lucas) playing in the front garden.  In more recent years, Sandra’s mother-in-law lived there too.

Sandra Nicholls says she spent the first 25 years of her life living a few yards ‘down the hill’ from Oak Cottages – initially in Pear Tree Cottage which, along with another identical terrace of three cottages, was replaced by Saxby Wood in 1968/69. 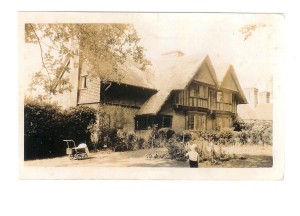 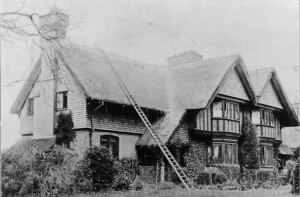 Oak Cottages, High Street, at entrance to the allotments