Thomas Baily built four cottages on the corner between the High Street and Lower Green in 1855 where today we have the Fleur de Lis and Fleur de Lis cottages.   (At approximately the same time he also purchased Home Farm and rebuilt the front of the farmhouse which is dated 1855 and in the same year he built Laundry Cottage as a bakery.)   The cottages (and later the pub) probably take their name from the Fleur de Lis which forms part of the Baily coat of arms.  Interestly, the goat’s head also forms part of the Baily coat of arms, on the crest, and this was the name given to what later became the Porcupine in Leigh.

The four cottages were included in the Sale of the Hall Place Estate in 1870.  The Sales Particulars describe them as follows:

(It is interesting that one of the two remaining cottages show tenants by the name of Brooker in the Hall Place Rent Books between 1930-1959:  whether these Brookers are connected to James Brooker above would require some additional research, not yet undertaken).

According to Lawrence Biddle’s Leigh in Kent 1550-1900 (p.129), at the time of the sale of the Hall Place Estate in 1870, of which these four cottages were part, they were bought by Bartrum and Co., brewers of Tonbridge. Later in the same year the two cottages nearest Lower Green was extended by a wing of similar design and with the adjacent cottage became a public house, taking a transfer of the licence once held Bartrum’s for the Porcupine (later the Goat’s Head). The two cottages to the east of the Fleur de Lys were later sold to Samuel Morley, no date given.

Between 1911 and 1921 the licensees of The Fleur de Lis Hotel were Polly (nee Rumley) and James Henry Jones and where Beryl Pawsey (nee Jones) was born in 1920 (see under Village Pubs in our archive), although she was only 18 months when her parents moved from Leigh.  When Polly and James Henry were licensees the Fleur was owned by the Dartford Brewery – as can be seen from the photograph above. 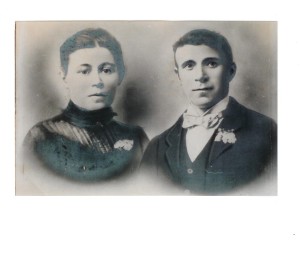 *  It was said that you could always get a drink out of the official opening hours by going round the back.  One version of history says that Tommy (originally from the Old Kent Road) ran off with his very young barmaid.  During WW2, Leigh Special Constables used to meet and drink in the Fleur.