↓ Skip to Main Content
Home › Around the parish and MAPS › High Street South Side – East to West; North Side East to West; and Lower Green › Chilling House (formerly The Limes) 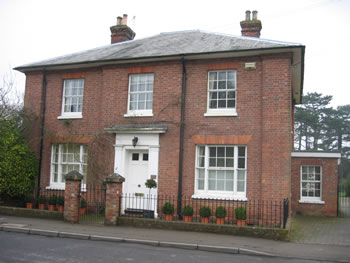 Chilling House was built in 1833, when it was known as The Limes. It was built for Dr Gregory, the first village doctor and he lived there with his wife and son, until he died in 1869. It is a good example of a house of late Georgian design (although in fact it was built in the reign of William IV).

Dr Gregory’s surgery was at the back of the house on the west side (the right hand side on the photograph), although the extension shown here was built in the mid-20th century. The auction catalogue of ‘The Limes’ household furniture, phaetons and carts, and effects of the late Dr Charles Gregory dated 12 May 1869 gives details of the house and its contents at that time. The original of this catalogue is in the Leigh archives, which gives the rooms of the house and their contents. Downstairs at the back had a scullery and pantry, and a kitchen; in the front were the hall and dining room. Upstairs there was a back chamber and 2 front chambers. There was also a servant’s chamber and a store room although it is not clear from the catalogue whether they were located upstairs or downstairs – probably the former. There was also the garden and stables. However, there is no mention of the room which would have been his surgery or its likely contents, but it was almost certainly at the back on the right.

The original stable block for two horse and one or two small open carriages was down the garden on the west side and had an extra room which was probably Dr Gregory’s area for making up his prescriptions. The block still exists although it has been converted.

After Dr Gregory died, the house was occupied by three other doctors until the 1880s.

In the 1911 census the house is still known as The Limes – and is described as having 9 rooms. Sarah Alice Smale, a widow aged 42 is living there (on her own means), with her son, Walter Reginald Smale, an Oxford undergraduate. Neither is local to Kent; there is one servant living with them.

On 15 October 1954 Chilling House passed from the Hall Place estate (officially the Hon. Claude Hope Hope-Morley (vendor) and Lawrence Austin Biddle (Trustee) to Diana Margaret Hope-Falkener: in this 1954 conveyance the land attached to Chilling House is as it now is. However, on 17 October 1960 Diana Hope-Falkener sold Chilling House (minus much of its garden) to Winifred Mable Green and Elsie Margaret Green.

On 18 December 1962 the Greens made a gift of Chilling House to their nephew Christopher John Duncan Law and on 10 July 1963 the garden was reunited with the house, when the land outlined in red on the plan was sold by Diana Margaret Hope-Falkener to Christopher Law for £1,000. After the death of her husband, Jennifer Law continued to live in the house with her daughter until the mid-1980s. On her death, the house was bought by Sir David Berriman. He changed the name of the house to Leigh House. He had the garage which attaches to the old stable built in about 1993. He owned the house for about five years before selling it to the current owners, Liz and Richard Heis and their family, in 1996, who immediately changed the name back to Chilling House. In recent years relatively extensive work has been done to the rear of the house to enlarge it at first and second floor levels.