Blackhoath Cottages were part of an area known variously as Black Heath or Black Hoath. The two cottages are situated between the railway line and the main road to Chiddingstone Causeway at the junction with the lane up to Cinder Hill. They were built before 1871 – as they appear on the 1871 ordnance survey map (see below) situated next to number ‘390’ on this map.

It is believed they were built as gamekeepers’ accommodation for the D’Lisle estate. At the time they were two-up/two-down, brick and tile-hung timber construction.

In 1911 they were acquired by Samuel Hope Morley (later 1st Lord Hollanden) and  held by him under a Building Lease which would expire on 25 December 1927.    At the same time Samuel Hope Morley also acquired Price’s Farm and Leigh Park Farm from the Penshurst Estate.

In 1921 they were offered for sale when the Penshurst Estate sold some of its outlying properties and land.   In the Sales Particulars they are Lot 30 (coloured green on the Map – numbers 491 and part 492).  They are sold as a pair of cottages with gardens and woodland of about 1 acre 16 perches.  At the time of the sale they are held by Mrs Healy and Mr John Gillett, and still held under a Building Lease by the Rt Hon Lord Hollenden as above.   They are described as brick built and tiled cottages each containing: sitting room, kitchen and two bedrooms, bakehouse, washhouse, two coal stores, two WCs, with water from well in garden and drainage to cesspool.

Post-war they had kitchens and bathrooms added to the rear. In the 1970s they were sold and in the 1980s both cottages were renovated, extended and outbuildings added. 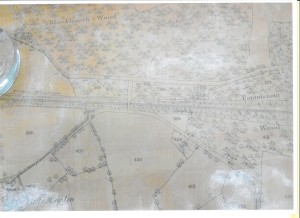 Photograph from 1882 copy of the 1871 Ordnance Survey Map