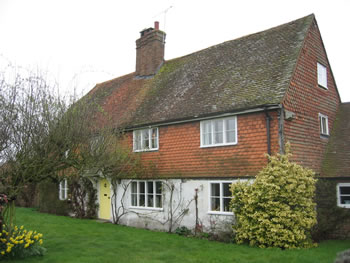 The house originally belonged in the ancient manor of West Leigh, owned by the Sidney family as part of the Penshurst estate. It is situated at the extreme west end of Leigh civil parish but has, since 1898, belonged to the ecclesiastical parish of Chiddingstone Causeway.

The early history of Applebys has been confused with that of ‘Dorkinghole’ – a site named in the two Perambulations of the Lowy of Tonbridge in 125 X and 127 X. It is a site whose location has been much disputed. Our local historian, the late Lawrence Biddle, decided that Applebys was itself the site of the mysterious Dorkinghole. In fact, a more likely candidate is a nearby house now called Whitepost, whose location, age and documentation make a better fit with the evidence than that of Applebys.

According to a local expert on old houses (Alan Dell of Edenbridge), Applebys was built around the end of the 16 th/ beginning of the 17 th century. It probably belonged to the Kettle family (as did Whitepost) since the fields surrounding it still bore names such as ‘Kettle’s mead’ and ‘Kettle’s pasture’ on the 1840 tithe map of the area.

By the mid 18th century the property had passed to the Turner family and having been a reasonably prosperous farm, was now in decline. By 1819 another small farm called Little Kettles had been carved out of its original acreage and by 1840 the house was marked on the tithe map as a mere ‘cottage’, part of Little Hampton Farm (Little Kettles) next door.

In 1844 Little Kettles plus cottage (i.e. Applebys) was bought by William Wells of the Redleaf estate. Between 1857 and 1859 Knotley Hall was built on its land and the cottage seems to have had some much needed repair to its roof. The farmhouse of Little Kettles became the stables to the big house and the cottage may have become at this time the laundry. Or it may have been the coachman’s house. It is believed that John Appleby who lived there had once been coachman to Florence Nightingale in his youth.

In the mid 20th century, the Children’s Society bought Knotley Hall and the cottage continued as either a laundry or as staff accommodation. In the 1960’s it was sold off to help pay for new modern staff cottages, and since 1973, after substantial repairs and renovation, has been a much loved family home.